Five Qualities that Made George Pogue Jr. “Business Person of the Year” 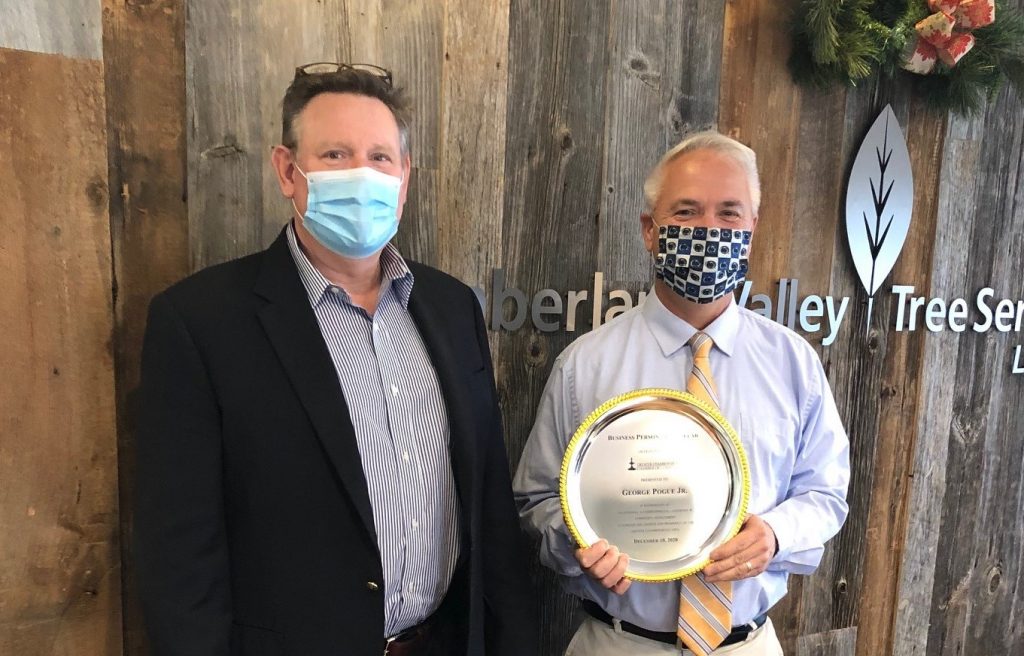 In December of 2020, the Chambersburg Chamber of Commerce announced during their annual meeting (held virtually this year) that CVTS-L’s own GEORGE POGUE JR. was their 2020 BUSINESS PERSON OF THE YEAR.

According to the announcement on the Chamber’s website, “George was chosen by a group of business and civic leaders for his professional leadership and business accomplishments that have served to positively impact the community.

You can read more about the award – as well as some kind words from the president and the chair of the Chamber – here (we won’t embarrass George here).

From helping his father by chipping brush back in 1978 to navigating the company through a succession, George has instilled into the company the values it needed to grow from a seed to four strong branches.

Like a tree, Cumberland Valley Tree Service – Landscaping has remained strong enough to support itself yet flexible enough to withstand life’s storms without snapping. And, like a tree, it has the potential to survive for many generations.

Here are five qualities of George Pogue Jr.’s leadership that led to his being named “Business Person of the Year.”

1. George Pogue maintained the “mentorship” mindset that started with the company’s founding.

When Cumberland Valley Tree Service – Landscaping was founded by George Pogue Sr. in 1978, it was with the backing and support of Dr. Joseph Kirkpatrick and his wife Ruth Kirkpatrick. It would take more than Senior’s fearlessness and natural talent for climbing and trimming – it would also require a solid business ethic. The Kirkpatrick’s would guide and support Senior over a seven-year period, but the success or failure of the venture would ultimately be up to him.

As Junior explained in a 2018 interview: “They set the company up and said, ‘Look, we’re going to teach you everything from how to shake hands and look somebody in the eye to what do you do if somebody doesn’t pay their bill to how do you write up an estimate.'”

They met regularly at Joe’s house to go over the book and the events of the week, while Junior looked on taking it all in.

When Junior became general manager in 1990, he retained this commitment to finding people with natural talent and developing them into full-fledged, well-rounded professional arborists through internal training and industry certifications.

Accordingly, at CVTS-L, management has always been as much about raising people up as it has been about bringing trees down.

As Evan Brumfield, who worked under George at the Chambersburg office before becoming manager of CVTS-L’s Hagerstown branch, described it: “Managing people is a complete career by itself – let alone the tree work and everything else. We’re investors. We’re you’re best friend. We sit and have long talks at night for employees who need it. We listen to your problems – even if they aren’t work-related. People need that.”

2. He raised the bar on customer service, presentation and education.

The commitment to mentorship shaped the internal dynamic of the company – how the employees of various levels interacted with each other – but George Pogue Jr. recognized that the company’s appearance and behavior on the customer’s property was just as – if not more – important. A lot of people can perform tree work, but it takes an additional level of skill to educate clients about their trees and make them feel comfortable with the high-flying acrobatics and machinery that might be required to get the job done.

Senior had instilled in Junior the fundamentals of onsite etiquette, but having spent years earning a degree in Forestry, becoming an ISA Certified Arborist and attending industry conferences had shown Junior that there was even better way. He incorporated elements of Dale Carnegie’s “How to Win Friends and Influence People” to increase the company’s in-person professionalism.

Lisa Pogue, CVTS-L’s corporate office manager recalled: “George tells the staff, the management team, the general foremen, that they’re all going to sign up for Dale Carnegie public speaking classes to learn how to speak in public and present themselves.”

From this point on, the arborist’s knowledge had value in addition to the services rendered.

The controversial issue of “topping trees” was one of the clearest differences between CVTS-L and competitors [learn why topping is bad here]. The company’s decision to end the practice was both an ethical stand and an opportunity to educate clients.

As Fred Schrom, manager of CVTS-L’s Carlisle branch, explained: “I cringe when that call comes in – ‘I have five trees, and I want them all topped.’ It’s my part as a salesman to go out and try to enlighten them on why that’s a bad thing and how we can do something better for them.”

He added that in addition to learning about their trees, “They’ll see you taking a stand for something right.”

3. George Pogue recognized that when you expand is as important as where you expand.

CVTS-L has grown slowly and steadily over the years, and it now includes four branches in two states – Chambersburg, Carlisle, Gettysburg and Hagerstown – plus a full-service landscaping division and a robust plant health care division. Back in 1978, however, the entire operation was run out of George Pogue Sr’s home in Scotland, PA.

“The trucks were parked at my parents’ house,” said George Pogue Jr. “Well, they probably only own about a quarter of an acre. We’re parking in the yard, hadn’t had a yard in years because the equipment is piling up…We just sort of outgrew the space.”

Only after they had enough business to support a new office did they move into their current location in Chambersburg. The same process was repeated for the other branches: sell the work, build relationships with customers, and only when the branch can support the full weight of a crew do you open a physical office there. It’s the exact opposite of the “build it and they will come” mentality that can cause companies to overextend themselves and end up closing those branches within a few years.

“It was in 1994, if I’m not mistaken, when we started the Carlisle office,” said Fred Schrom. “Because I lived up here, George thought, ‘Okay, we’re going to start a phone number up in Carlisle. We’ll see where that takes us.’ That’s kind of how we build the whole way up through…I would drive to Chambersburg, get my crew, drive back to Carlisle and do the work that I sold, and it finally snowballed to where there was enough to keep me busy all time up here.”

It was a similar “snowball” progression with the Gettysburg branch. It took them two years to find a suitable location for the office, and in that time manager David Poe divided his time between managing two-to-three tree crews out of the Chambersburg office by day and building a client base in Gettysburg. Today, the office runs four tree crews and a stump grinding crew.

For decades, both Pogues – Senior and Junior – had long hoped to have a stronger presence in the Maryland market, but it was only after they had built up enough of a customer base and had the right manager to lead the new crew that they finally broke ground.

4. He committed to taking actions that would move the entire industry forward.

One thing that has marked the careers of both Senior and Junior is that when they find a better way to operate, they take it. Senior learned the fundamentals from the Kirkpatricks, and then Junior added to that foundation.

Pogue has worked hard to share his knowledge with the next generation so they don’t have to start where CVTS-L was in 1978. Instead, they can improve upon his work, and the industry will be made ever-safer and customers will be better satisfied.

As our 2021 newsletter explains: “CVTS-L is active in the community philanthropically, offering both financial and physical support to civic organizations and charitable causes. George has volunteered with the Chambersburg Rotary, Forest Technology Advisory Board, Penn State Mont Alto Board of Directors, Penn State Mont Alto Arboretum, and the Freedom in Christ Church Board.”

As we saw above, Pogue brought significant change to CVTS-L, and part of that commitment to moving the company forward has been his openness to new ideas. In an industry as ever-changing and competitive as tree care, he can’t afford to miss out on the next great idea.

Every year at the conclusion of the company’s “Yearly Gathering,” he encourages his nearly 100 employees to submit their ideas to help make the company safer and more efficient. As he has pulled out of the field to take over managerial duties, he has remained aware that the crews on the ground (and in the trees) will be the first to discover potential problems – and they will be in the best position to solve them.

The Hagerstown branch in particular has become a hotbed of new ideas proposed by Evan Brumfield that are being tested out including a tablet-based scheduling system and an innovative solution to the industry-wide problem of disposing of massive quantities of woodchips. 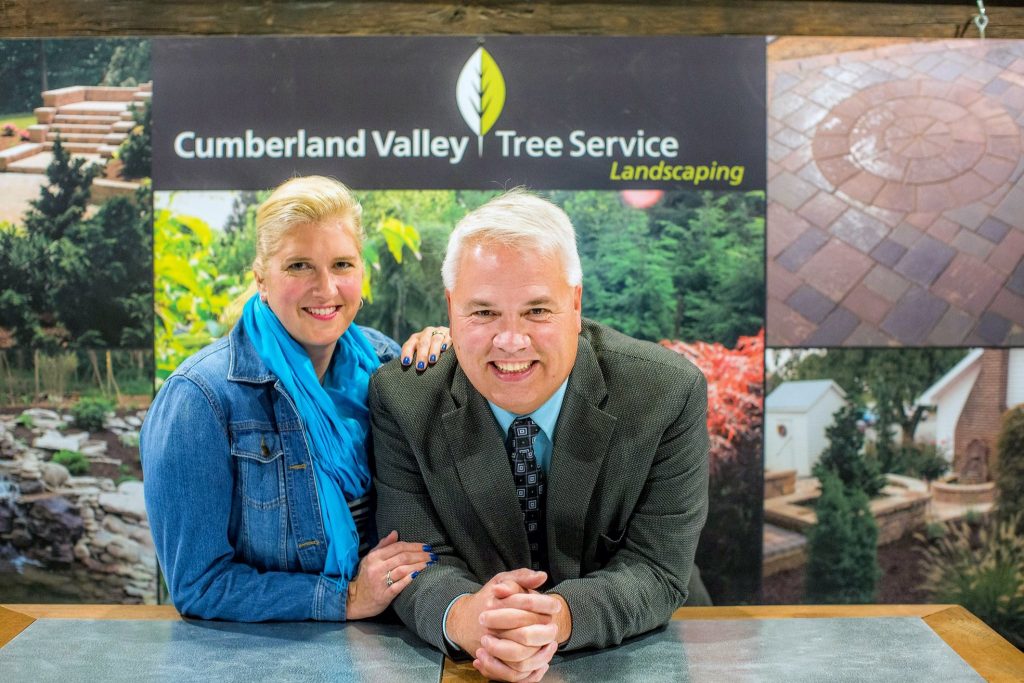 5. George Pogue knows when to delegate – even when it’s difficult to let go.

In the 40-plus years since the company was founded, Pogue’s role in the company has changed drastically – from clearing brush in 1978 to manager to co-owner – and he has had to adapt accordingly. The only thing George loves more than trees is his customers, which has made the company’s latest transition particularly difficult for him. The responsibilities of overseeing four thriving offices has forced him to give up increasing amounts of fieldwork and spend more time in the office (although he still finds ways to get out there).

“I’m going to give up my salesman duties – most of them – within a year of two,” said Pogue in 2018. “I’m probably going to have to start actually running the company. Right now, I sell five and six days a week…I need to replace myself in the field. That’s where we’re headed with this.”

Accordingly, he has divided up many of his long-time clients among the other offices and they redrew their respective territory maps. it has been difficult because he will miss visiting the clients – has been servicing some of their trees for 20 and even 30 years.

Evan Brumfield, who has taken over a lot of Pogue’s Maryland and southern Pennsylvania clients, described George’s sales style as: “George is the jovial ‘talk-about-your-grandparents-while-I’m-here-looking-at-your-trees-found-out-we-went-to-school-together’ mentality.”

But George has no worries about changes in the quality of service during the transition. The whole point of CVTS-L’s commitment to mentorship and service has been to make sure that every contact with the company is professional, competent and consistent. When a customer encounters a crew from CVTS-L, they are talking someone who was either trained by George Pogue Jr or trained by someone who was trained by George Pogue Jr.

An arborist with Cumberland Valley Tree Service – Landscaping – on their first day on the job – arrives on your property backed by more than 40 years of knowledge and experience in Tree Care, Landscaping, Plant Health Care and Stump Grinding.