Mulching calls to mind images of pitch forks, wheelbarrows and being out in the hot sun for hours. But the challenge of mulching isn’t just the labor. Mulching needs to be guided by a strategy that factors in potential intrusions (grass and weeds) without jeopardizing the health of your trees.

Aesthetically, mulch adds clean lines and definition to a landscaping project that help the view while keeping weeds down and providing critical support to the plants that you do want. But if it’s applied incorrectly or haphazardly, that same mulch will become an untidy, weed-ridden mess that might actually be causing long-term damage to the trees on your property.

Mulch needs to be applied correctly from day one and then maintained throughout the season for both orderliness and effectiveness. Without proper attention to detail, that freshly placed mulch will be spread throughout your yard by rainfall and animals, and you will have weeds popping through in no time.

Admittedly, at CVTS-L, we are mulch snobs. For people who know what to look for, it can be painful to watch as people make expensive mistakes that will be (at best) ineffective and (at worst) detrimental to the long-term health of their landscaping.

Mulching needs to be done correctly, but that doesn’t mean that it has to be difficult or expensive.

Here are a few thins that you can do to ensure that you get the most out of your mulch all summer long as well as a few time-and-money-wasting steps that you can skip this year.

1. Keep the mulch and grass separated.

It is important to maintain a clear line of delineation between mulch and grass. At CVTS-L, we start by using a bed edger to establish a crisp line between the lawn and the mulch bed. Then, you can use a weedwhacker to maintain that crisp edge throughout the growing season. Grass encroaches on mulch beds when the grass gets neglected, so the secret is to make sure that the bed line is nice and easy to mow by avoiding sharp angles. Keeping on top of the lawn care will help to ensure that the grass never has a chance to cross the line. As an added bonus, potential weed problems will be reduced because the treatment (and re-treatment) space will be more clearly defined. 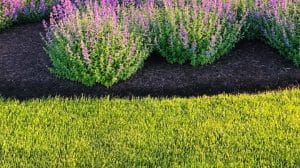 2. Remove the barriers between the mulch and the ground.

For the most part, placing any type of weed barrier beneath your mulch bed will be a waste of time, money and effort. If you’re already put the plastic and newspapers down, this news might be difficult to hear, but they are largely unnecessary. That is, if you adhere to steps three and four.

3. Pre-treat the soil before you put the mulch down.

As with most landscaping problems, it is always better to prevent potential problems from day one than it is to repair the mistakes of previous seasons. The most effective way to keep weeds from overtaking your mulch is to pre-treat the soil with an herbicide before the mulch bed is installed.

4. Treat the mulch itself with a pre-emergent.

Once the mulch is in place, we advise people to then treat the mulch itself with a pre-emergent that will proactively keep weeds from popping up in the future.

5. Re-treat the mulch throughout the season.

The herbicide will treat the existing weeds, and the pre-emergent will keep them at bay for a period of time, but the lifetime of that treatment is anywhere from thirty days to three months. The point is that – just like grass – weeds will never stop trying to overtake your mulch bed. You have to remain vigilant and one step ahead of them. Even if it lasts as long as the label suggests (which is probably overly optimistic), that treatment that you applied in April won’t last all summer, so it is important to re-treat. 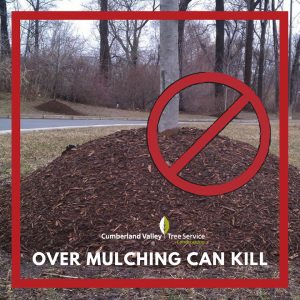 There is a natural temptation in landscape design to ascend gradually from the grassy edge of the mulch bed to a central point, which is often the base of a tree. The result is a little mountain of mulch, which might be visually appealing, but can be quite dangerous for the health of the tree. We call it “volcano mulching,” and it should be avoided at all costs. The piled-up mulch will draw excessive moisture to the base of the tree, which can cause the tree and its roots to rot – especially with our region’s record-setting rainfalls.

7. Protect the roots of trees and shrubs.

Keeping in line with our prohibition of volcano mulching, it is important to remember that there is a rich ecosystem beneath your mulch bed that also needs to be considered. The root system of a tree extends at least as far as its canopy, and 90% of the roots of any tree are within 12 inches of the surface because that is where the oxygen is concentrated in the soil. Mulching too deep can – as we mentioned above – can lead to root rot, but the decreased access to oxygen can cause the roots to become stressed and even suffocate. There is also an increased risk of “girdling root.” Here, the roots are forced to grow in an unnatural pattern in which they circle around the base of the tree – overlapping each other – and slowly strangle each other (and the tree as a whole).

Mulching doesn’t have to be expensive or difficult, but when it’s done incorrectly, it will surely be both. Just remember to protect it from intruders – grass from the sides and weeds from below. A physical separation can help with the grass, but it is better to forego the physical barriers when it comes to weeds. For weeds, we recommend pre-treating, treating and re-treating. It is always easier to proactively prevent weeds than it is to try to get rid of them once they start poking through.

Many people are surprised to learn that mulch can actually kill their trees, but it’s true. Avoid volcano mulching and avoid putting excessive weight from mulch or top soil onto the roots growing below. The problems you are creating down the road will far outweigh any visual appeal today when your cherished tree needs to be removed because it is now a threat to your house (and your neighbors’) and replaced with a sapling. As with the problems of grass and weeds, root rot and girdling root can be avoided by taking the proper steps now.