Spotted Lanternfly Quarantine Expanded for 2021: What Does That Mean? What’s Next? 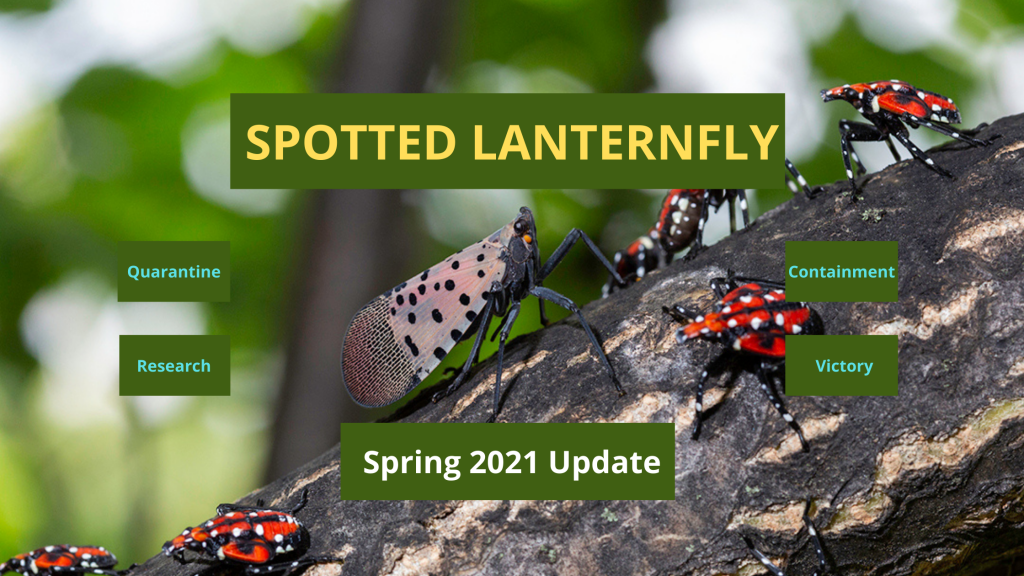 Franklin County is being added to the spotted lanternfly quarantine zone in 2021 as the invasive insect continues to spread across Pennsylvania.

We asked Jamey Schwartz, CVTS-L’s plant health care manager, what this means for businesses and residents who are finding themselves in the quarantine zone for the first time.

He also gave us an update on the ongoing battle to slow its spread – and a look at what comes next.

1. Here’s what the quarantine designation means for Franklin County residents.

In order to help slow the spread, Franklin County residents are asked to conduct regular inspections of their properties. When they discover a spotted lanternfly, they should remove it, devitalize it, place it in a sealed bag and dispose of the bag in the garbage.

Businesses like CVTS-L, which operate within quarantine zones are required to follow strict guidelines, which include: leaving all plant debris within the quarantine zone (specifically on the property where it originated whenever possible), inspecting vehicles before leaving the quarantine zone (with documentation), and carrying a spotted lanternfly permit in every company vehicle within the area.

We already have some experience operating within these guidelines in Cumberland County and along the Susquehanna River, so including Franklin County won’t cause any disruptions on our end. You can learn more about CVTS-L’s efforts to slow the spread of the spotted lanternfly – and how you can help – here.

2. Pennsylvania continues to lead the way in spotted lanternfly research.

“Penn State Extension is the go-to source right now because the lanternfly was first introduced into Pennsylvania,” said Jamey Schwartz.

He explained that being on the forefront is challenging because of the devastation caused by the spotted lanternfly, but there is an advantage to being so close to the source.

“All of the research is pretty much Pennsylvania-based at this point…They’re leading the charge for managing this pest.”

It is believed that the spotted lanternfly has been in Pennsylvania since 2012, although it wasn’t identified until 2014. It has spread beyond Pennsylvania into New Jersey, Delaware, Maryland, West Virginia and Virginia, but those infestations are relatively small.

Pennsylvania is bearing the brunt of the damage, but the early research has helped PA and other states slow its progress substantially.

3. The quarantine effort has actually been very successful so far.

Because the spotted lanternfly updates are generally negative – new sightings, new quarantines – it can feel like we’re simply losing more and more ground. The reality, however, is more complex, and – all things considered – the news is actually pretty good.

Schwartz explained that the concept behind the quarantine is to slow it down and allow Penn State Extension and the Department of Agriculture to continue to research and experiment. The goal is to buy them time to identify the best chemical treatments and management approaches to use in the field.

He added: “When it was introduced to South Korea, it spread from one end to the other in one year. Pennsylvania is basically the same size as South Korea, but it’s been here since – they believe since 2012, it wasn’t identified until 2014 – here we are, it’s still not even half of Pennsylvania.”

“I think what they’ve done has worked. Basically, the best we could hope for is to learn how to manage it better and continue to keep it at bay.”

4. An enemy of our enemy: releasing natural predators into the quarantine zone.

Previously in this blog we discussed some promising strategies including systemic insecticides and setting elaborate traps. These methods are effective, but they’re still a bit unpredictable. Like bagworms, the most effective treatment – so far – is also the simplest: crush them.

In the words of the Pennsylvania Department of Agriculture: “…we need every Pennsylvanian to keep their eyes peeled for signs of this bad bug – to scrape every egg mass, squash every bug, and report every sighting.”

As we mentioned above, these efforts have been implemented primarily to slow the spread enough to buy the scientists enough time to develop a comprehensive strategy. One leading idea is to find – or introduce – a natural predator to check the spotted lanternfly’s rampage.

“They sent scientists over to China, and they collected some predators, parasitoids and natural enemies,” said Schwartz. “They have to rear them in a lab for a period of time to see how they react to – and make sure they don’t attack – some of our native insects.”

The first releases would be limited, but if they are successful, the program could be scaled up from there.

5. The long game: learning to live with spotted lanternfly.

Now that it’s here, it’s not expected that we will ever be able to completely eliminate it. “It’s going to be something that we’re just going to have to manage and keep at bay,” said Schwartz.

One of the reasons it has proven so difficult to remove completely is its food preference. while the spotted lanternfly can feed on hundreds of trees including river birches, maples and walnut trees, its favorite is the ailanthus, a pesky, weedy tree that can germinate in just about anything (even cracks in sidewalks and driveways).

Even the “natural predator” solution discussed above isn’t intended to wipe them out.

“It’ll take some time, but eventually we will get enough natural enemies to suppress it,” said Schwartz. “You’re not trying to eliminate it or eradicate it. You’re just trying to keep it at bay so it’s not as large of a nuisance.”