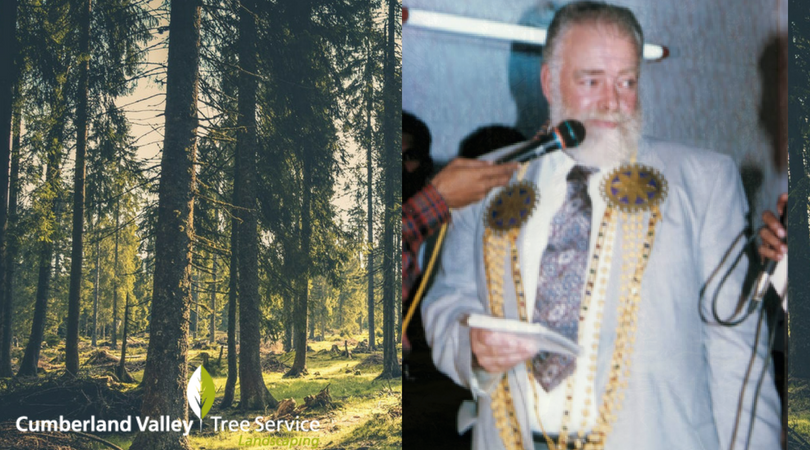 Family friend Don Engle provided solid leadership, oversight of crews, vehicle and equipment record keeping as well as trusted spiritual counsel for more than 30 years. He is sorely missed by so many of us since his passing in 2012. In addition to his work at CVTS-L, Don served faithfully by the side of George Pogue Sr in the ministry. You see, George Sr not only embarked on starting a tree service in 1978, but he also established Freedom in Christ Church that very same year.

Previously in the blog, we talked about Joseph and Ruth Kirkpatrick’s mentorship, which guided the young company (and in many ways George Pogue Sr) from a seed to a sapling. In addition to the wisdom, they had also made the initial investment in the equipment: a bucket truck and a pickup truck. At this time, like a true startup, the company was still being run out of George Pogue Sr’s kitchen in a house in Scotland, PA. With the hiring of their first employee – George Sr’s nephew – the company was on its way.

At this stage in the company’s growth, the employees were few and the work was great, so each member of the rag-tag team had to take on many roles. Even with the experienced guidance of the Kirkpatricks, the way forward was fraught with unknowns and unexpected challenges, which required extraordinary strength and flexibility.

And as the company continued to expand and explore new business channels, nobody embodied the startup mindset more than Don Engle as he navigated his crews through the metaphorical and literal wilderness.

In the early 80s, Cumberland Valley Tree Service had grown to include two trucks, which represented the two core divisions of the company. The first truck was designated for “residential” jobs, which makes up a substantial portion of our business today. But back then, the second truck was where the action was. The second truck was designated for “utility” jobs. During this time, the telephone companies were busy installing new lines across the country, and much of this territory was covered with trees and other growth that needed to be trimmed and cleared to maintain utility line clearances.

We were fortunate to recognize this opportunity, and we were equipped to take full advantage of it. We had the equipment and a rugged, adaptable crew that was up to the task. Without Don Engle, we might not have been able to adapt, grow and elevate the company to the next level.

Maintaining a Startup Mindset: Discipline in the Wilderness

The work performed by the utility crew took them all around the region. The crew would travel for a week at a time, setting up camp for the night where they worked. It took a person of strong character to coordinate the day-to-day work as well as overseeing the care, feeding and other logistics of a crew on the road. The crews would make friendships with local homeowners, and they would have to find places to dump the wood, do their laundry and get the occasional homecooked meal – sometimes exchanging firewood for these services.

Keeping in line with the Kirkpatricks’ and, subsequently, George Pogue Sr’s belief in the rehabilitative nature of work, CVTS-L was able to hire and travel with work-release employees. With the ruggedness of John the Baptist and the faith of a pilgrim relying on the kindness of strangers in uncertain terrain, Don Engle was the ideal overseer of these uniquely challenging expeditions.

Maintaining a Startup Mindset: Knowing When to Pivot

The business environment is always changing, and after years of capitalizing on the utility work, we became aware of two developments that would change the direction of the company. First, the rules were changing, and we were no longer able to take work-release employees out on excursions.

Second, the utility work became increasingly “low bid.” It’s hard work, but it doesn’t require great skill, so the jobs are typically awarded to the company that is willing to do it for the lowest price. For a growing company, this is a dangerous temptation, and it is very difficult to turn down work. But there is a point where a company has to draw a line and pursue new channels of business. Fortunately, at this time, we were also getting more and more residential clients.

Maintaining a Startup Mindset: Seeing the Future and Making It a Reality

As the company moved through the 1980s, Don Engle was a key figure in growing CVTS-L so that it could make the leap and transition into its next level of maturity. In 1985, George Pogue Jr was added to the company payroll, and he brought with him an associate’s degree in Forest Technology. During his time studying at Penn State, Jr was able to see that there was a better way to run a tree care company.

The future of the industry was rooted in science, research and an increased emphasis on professionalism. As the door to utility work was closing, Don Engle had guided the company through the wilderness. Cumberland Valley Tree Service had taken root, and now it was time to spread its canopy and grow upward and outward. Education has become a key element to CVTS-L’s success. Having a knowledgeable team is obviously important, and we love to educate customers about the plants and trees on their properties, but our commitment to ongoing education has given us vision into what lies ahead for the industry, and it allows us to maintain a startup mindset after 40 years of growth.

[This picture of Don Engle was taken during a trip to Chennai, India where Don lead a team to minister to the local people and dedicate a large church in the downtown area].