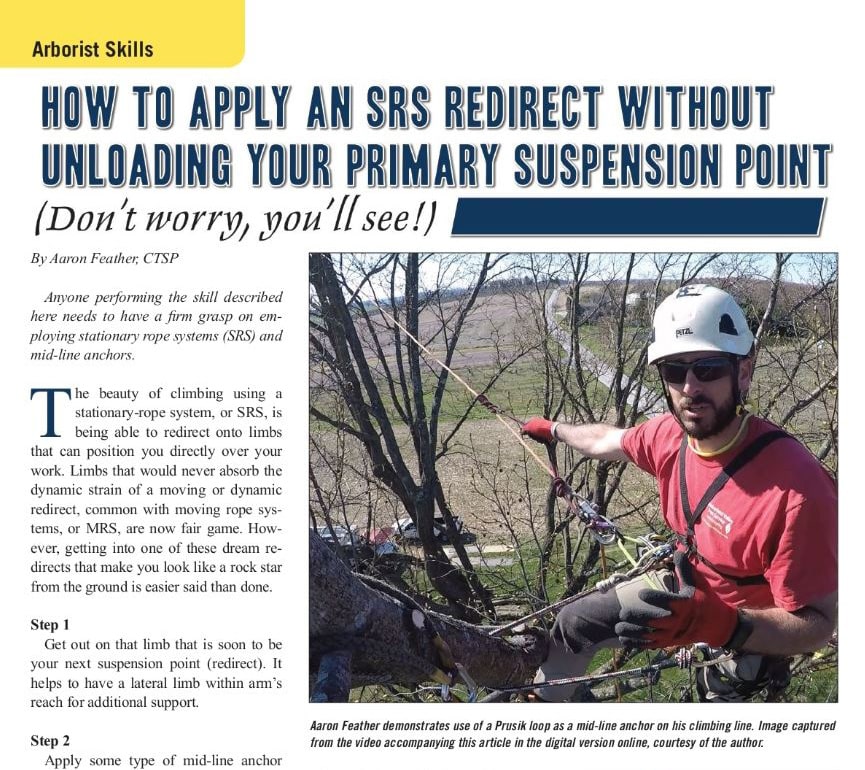 CVTS-L Safety Director Aaron Feather, CTSP noticed that there was an abundance of information online and at industry conventions to help new arborists get started.

This makes sense because beginners make up the largest and broadest audience, and they need the most information.

After all, everyone needs the fundamentals.

But as arborists advance and gain experience, good information becomes harder and harder to find.

So Aaron Feather decided to change that by creating content for more experienced arborists that demonstrates the safe execution of more advanced techniques.

He started with a highly technical step-by-step guide titled “How to Apply an SRS Redirect without Unloading Your Primary Suspension Point,” which appeared in the May 2020 issue of “Tree Care Industry Magazine” with an accompanying video.

The magazine is published by the Tree Care Industry Association (TCIA), a third-party trade association that develops and maintains safety programs, standards of operation and continuing-education certifications at the national level.

Cumberland Valley Tree Service – Landscaping is a 20-year accredited TCIA member company, and we encourage our crew members to constantly expand their tree care knowledge through the extensive programs offered by the TCIA.

“It’s certainly not a basic skill,” said Feather of the technique he presents in the article. “It’s definitely in the advanced category.”

For some background, he explained that SRS stands for “stationary rope systems,” which is one style of climbing in an arborist’s toolbox. With SRS, a rope is run over a branch or in a crotch, and then you either tie it off up in the tree or at the base of the tree, and the arborist moves up and down on the rope. The rope remains stationary.

“It enables a better rope angle,” said Feather. “When you’re climbing, the more vertical your rope is, the safer you are.”

Adding: “If you slip or fall, you’re not swinging into the tree. Redirecting allows for better, safer work positioning.”

Being an advanced technique, Feather often reminds readers to “try it low and slow first…maybe from a deck post in your backyard” and Steps 3, 4 and 5 each implore you to “check your connection to the anchor.”

“The reason I have that part in there three times is because it’s just something that needs to be correct,” said Feather. “There’s just a lot going on, which is why it’s a more advanced skill. When things are getting busy, that’s usually when mistakes get made. You’re adding more hardware. You’re adding a couple more knots. That’s when the inexperienced person is more likely to make a mistake or forget a step.”

Feather has previously contributed to articles and has been featured a few times, but this is the first time he has been asked to submit one by himself.

“I hope to do a few more of these over the next couple of months,” he said.

Before the COVID-19 pandemic and social distancing entered our vocabulary, Aaron Feather used to lead weekly safety “Tailgate Meetings” at the Chambersburg office.

The 10-minute safety meeting would then be followed by a weekly update from George Pogue Jr.

But now that large groups are out, Feather has taken the weekly safety meetings online.

“I’ve been doing a video meeting,” said Feather, “and sending out a link on the company-wide e-mail.”

The topics have included everything from avoiding back injuries to the “hazards of inexperience.”

“I’ve just been doing as much as I can to try to create content and give people something to go to.”