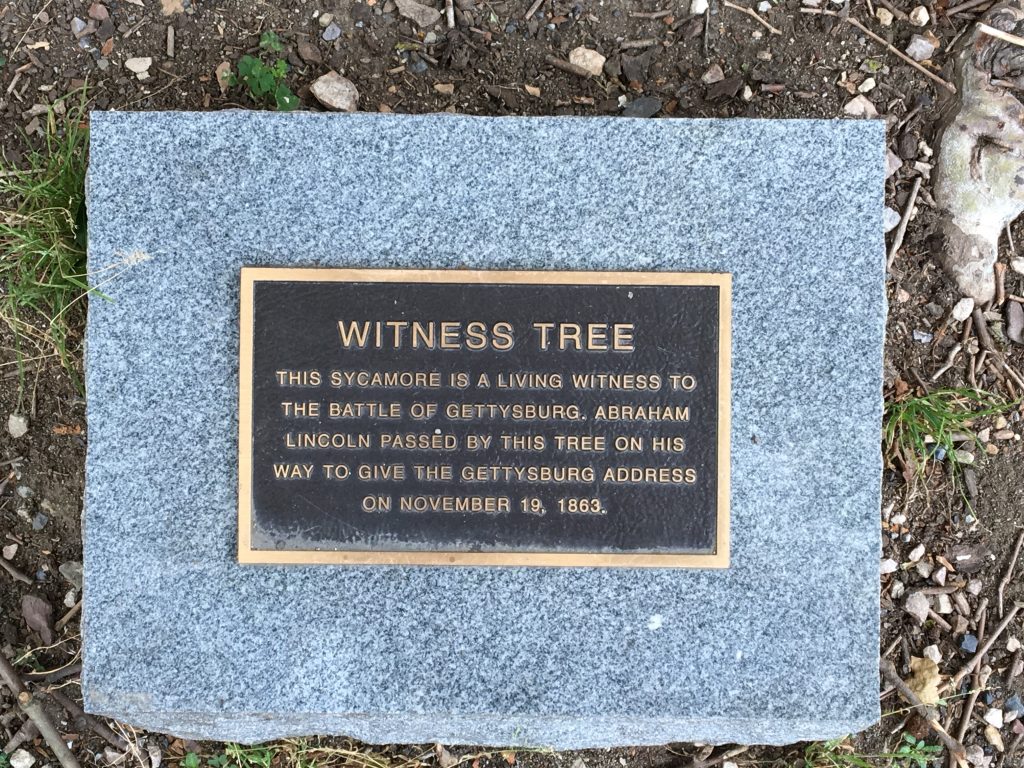 Visitors to the battlefields in Gettysburg are often left to imagine how it would have looked to soldiers in 1863, but thanks to the hard work of conservancy groups and tree care professionals, many Witness Trees still stand today. Witness Trees are trees that “witnessed” the battle that took place July 1-3, 1863.

David Poe is an ISA-certified arborist and a Maryland Licensed Tree Expert with CVTS-L. As the manager of our Gettysburg office, he has first-hand experience maintaining and preserving Witness Trees, which typically includes annual inspections to make sure there are no dead limbs or any other insect or disease issues.

“You can imagine all of the history that happened while that tree was living,” said Poe. “This tree was probably mature during the Battle of Gettysburg. This might have been a place where troops met to take a break.’”

Two of Gettysburg’s more famous Witness Trees stood in front of what is now Mr. G’s Ice Cream on Baltimore Street. Known as the “Twin Sycamores,” the trees can be seen in a picture dated November 19, 1863 – just moments before Abraham Lincoln passed by to deliver his Gettysburg Address.

Unfortunately, only one of the trees remains standing today. It has a small memorial marker in front of it reminding tourists, history buffs and local residents that the events of July 1-3, 1863 are still with us today. The second tree was removed about ten years ago.

The decision to remove a Witness Tree is a difficult one, but public safety is almost always the deciding factor. No one wants to see a Witness Tree fail in any way, but their age combined with the heavy pedestrian traffic in Gettysburg can cause problems.

“They’re old trees, so we lose a couple every year almost,” said Poe who estimated that there might be less than 100 Witness Trees left in Gettysburg. “We try to save them at all costs, but sometimes they just get to the point where there’s nothing you can do for them.”

He added: “A lot of times, it’s a matter of safety and liability. We try to prune and preserve the tree, but occasionally they just get to the point where there’s nothing we can do to alleviate the risk, that’s associated with a certain amount of decay or a certain amount of the crown being dead.”

His office was once called out by a concerned citizen/historian to assist with a 300-year-old Oak tree that had a split in it. CVTS-L installed metal brace rods and cables to help keep it structurally sound.

That tree stands on private property, but there are other times when CVTS-L has to work within guidelines established by the Gettysburg Shade Tree Commission or other conservancy groups that dictate when a tree should be removed and what it can be replaced with.

For example, The Sycamore tree that had been removed from Mr. G’s was replaced with a young Sycamore that Poe is pleased to say is doing well.

A cross-section of the original tree can still be found inside Mr. G’s. The cross-section depicts where a bullet had struck its trunk during the battle. The rest of the tree has been turned into souvenirs that can be purchased in Mr. G’s gift shop.

The trees on your own property might not be Witness Trees, but professional tree care is still critical to ensure that they survive to see another generation pass underneath their branches. After all, they are “witnesses” to your family’s history, and Cumberland Valley Tree Service – Landscaping has the knowledge and passion to preserve them through all of their life stages.